Whether you’re new to BBQ and grilling or a seasoned pro pit master, you’re no doubt familiar with the popular pork cuts of shoulder and baby back ribs. Go to any barbeque joint in America and they will be serving a plate of pulled pork shoulder and ribs, usually as a combo option.

The pig and low and slow BBQing are synonymous with each other. Some pit masters just skip cutting up the pig and smoke the whole hog. Chances are though you won’t have enough people over on Sunday to justify doing that. So, you’re going to want to know which pork cut to get for the right occasion. In this Bossin’ Guide, we will break down both traditional and exotic cuts as well as the preferred way to cook them. 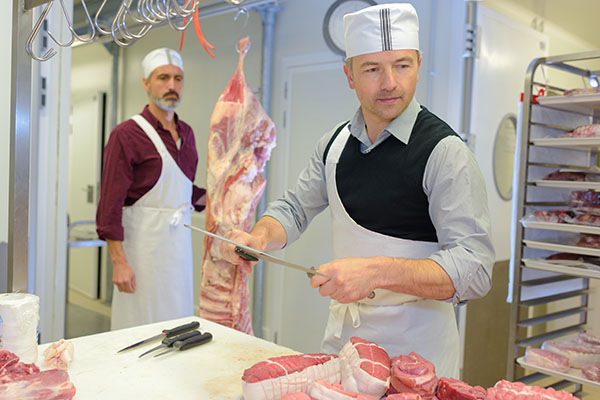 Primal pork cuts are the four main cuts that are sold to butchers from wholesale. The butcher then divides the main primal pieces into the pork cuts you see in the grocery store or at the market.

As a general rule, the primal pork cuts from the top of the pig (the loin) are leaner and tender than pieces from the bottom. Cooking the tougher cuts (shoulder and hocks) low and slow can make these pieces tender and juicy. And it’s important that the cuts available at the grocery will vary depending on geography.

Let’s go over the more common cuts of pork as well as the best ways to prepare and cook them.

The front of the pig: Pork shoulder (also called pork butt or “Boston butt”) is typically sold around 5 to 10 pounds as a boneless roast at the grocery store. If cooked right, pork shoulder can be tremendously juicy and full of flavor. This is due to the fat content of the pork cut and the bone.

Most experts suggest this for roasting since it’s a relatively tough cut, well layered with fat, and is good for braising, slow and low roasting or barbecue (smoking).

Boss Tip: Smoke slow and low for 5 hours + for pulled pork that falls off the bone. 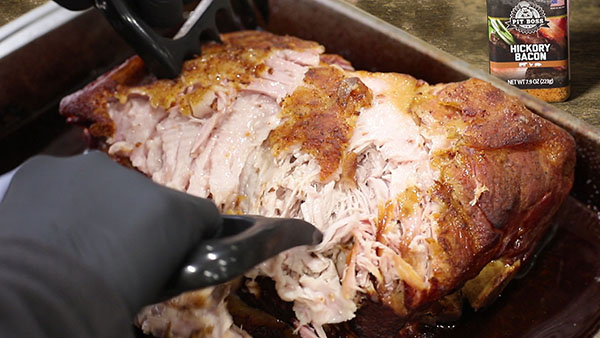 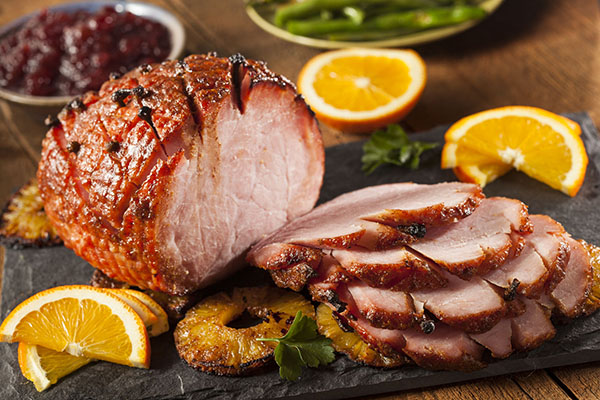 Directly below the shoulder is the next cut you’re likely to find: the picnic ham (occasionally called the picnic shoulder). This isn’t like your normal version of ham, say experts, but the picnic ham is the lower part of shoulder. Another tough and fatty cut, though it is often sold bone-in.

Smoke or Braise – slow cooking methods are key to render the fat and make the meat tender and flavorful.

Boss Tip: The larger fat caps on the picnic ham are great for making cracklings.

FRONT AND BACK HOCKS

A ham hock (or hough) or pork knuckle is the joint between the tibia/fibula and the metatarsals of the foot of a pig, where the foot was attached to the hog's leg. It is the portion of the leg that is neither part of the ham proper nor the ankle or foot (trotter), but rather the extreme shank end of the leg bone.

Ham hock usually comes brined and smoked and labeled as “ham hock” in the store.

Use the brined and smoked version for pork and beans or in your collard greens. Always best for low and slow cooking and enhancing the flavor of dishes.

Boss Tip: It’s very important to thoroughly clean and soak ham hocks in water for 24 hours before cooking them. 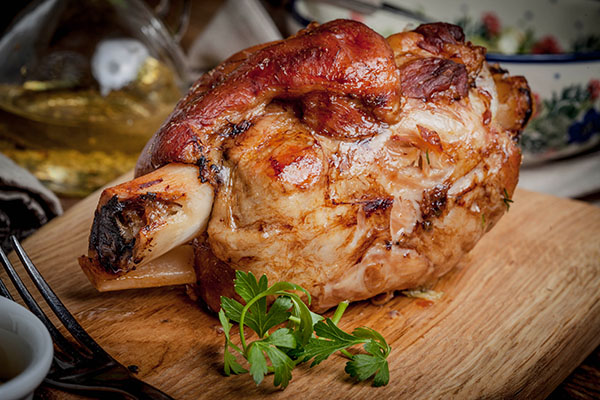 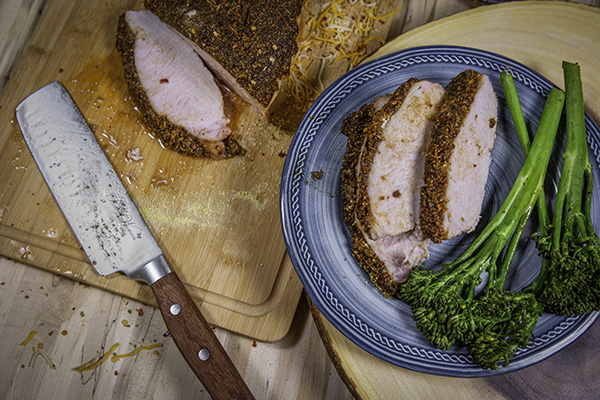 The pork loin, not to be confused with its smaller cousin the tenderloin, comes from the pig’s back. Large and tender, this is one of the leaner cuts of pork. The cut runs from the shoulder all the way down to the beginning of the leg. It’s often referred to as a roast due to its size, which makes it a great cut for parties or gatherings.

Experts recommend a slow roast, but don’t cook it too much, or on too high of a heat. Since this is a lean meat, it will get dry.

Boss Tip: Inject a marinade to help retain moisture during the roast or smoke.

Meat perpendicular to the spine, and often from the loin. Thick or thin, bone-in or bone-less pork chops are cut from this perpendicular location.

Skillet cooked, grilled on medium heat (10-15 minutes per side), or smoked at 250°F for 1 hour 30 minutes. Ensure that the internal temperature reaches 145°F.

Boss Tip: Using thicker pork chops (1 inch thick or more) allows for your meat to develop a flavorful crust before cooking too quickly. 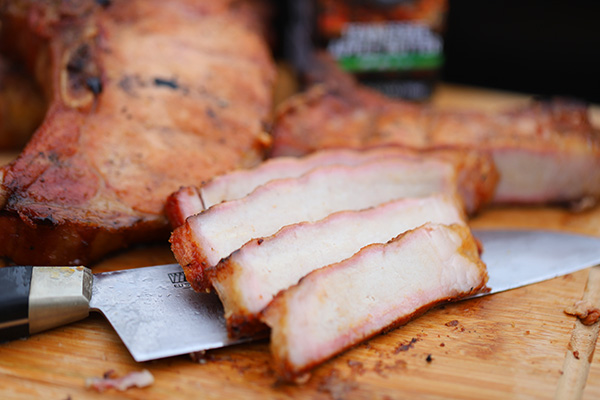 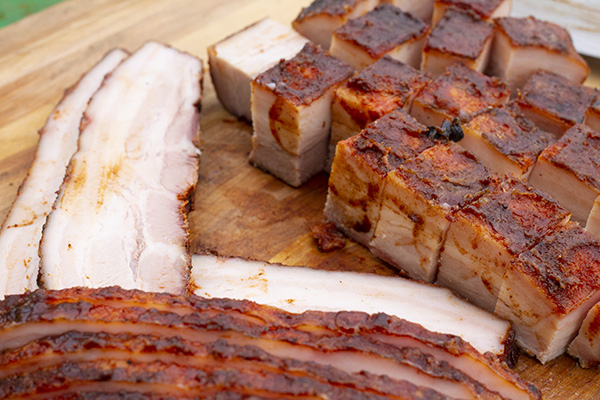 Bacon is pork belly cured, smoked, and sliced. If you like to give a pig a good belly rub you’re touching the belly meat. Pork belly is very flavorful and versatile. As such it can be used in a variety of dishes either as the star or in a complimentary way.

Boss Tip: For cracklin’ pork belly skin, be sure to poke holes all over the skin with a toothpick or fork. Then dry the skin as much as possible with a paper and ensure moisture does not get on the skin before cooking.

Debone a pork loin, and the ribs that come off are baby back ribs. This is a tender rib option: The meat in between the ribs is a loin meat instead of a belly meat. Baby back ribs are one of the most popular rib cuts from a pig. They are taken from the upper back and are only called baby backs because they are shorter than spare ribs.

Boss Tip: When using a dry rub, rub spice mixture all over the ribs. Cover with plastic wrap and refrigerate ribs for at least 2 hours or up to 12 hours. 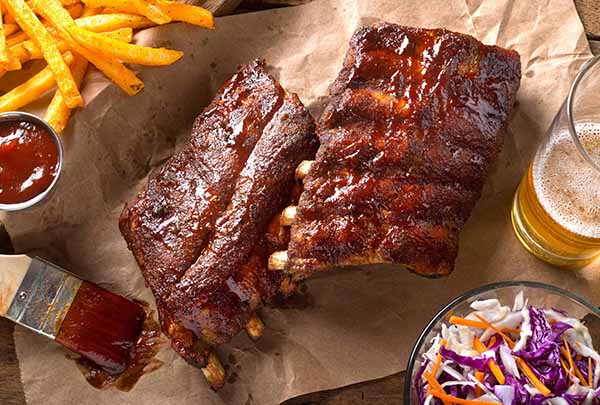 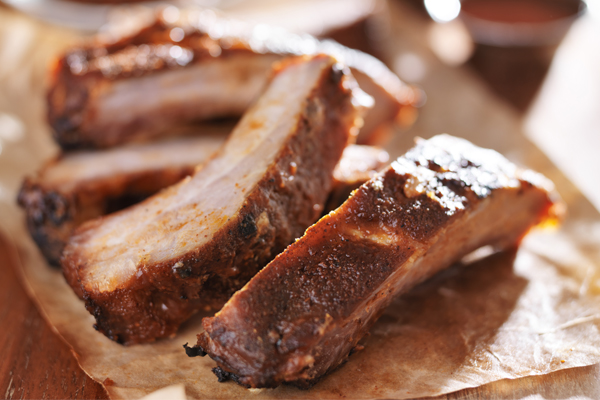 Spare ribs come from of the belly too. Usually served as regular or St. Louis style (cut off the cartilage to be recto-linear and cook more evenly).

Boss Tip: Spare ribs pair great with Asian flavors so don’t be afraid to use soy or hoisin sauce as a rub.

The pork sirloin is the end of the loin closest to the rump. It tends to be boney and is less tender than the prized center loin. As such they can dry out quickly. A bone-in sirloin contains part of the hip bone, so it is very tricky to carve. It’s best to request a boneless roast even if it costs extra money.

They are great marinated and grilled. 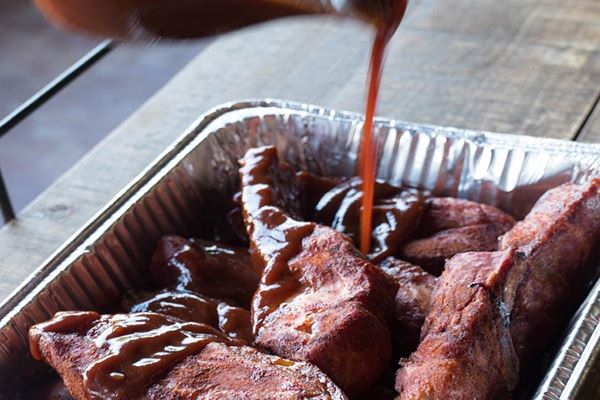 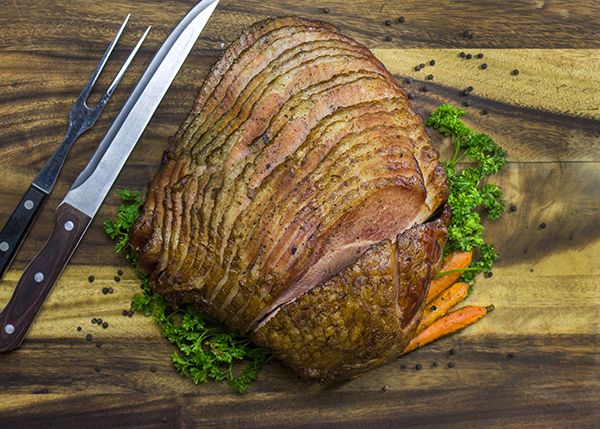 Commonly eaten as ham, and is typically cured, smoked and processed in some fashion. Ham is eaten throughout the day as it is very a very versatile pork cut. Your can either buy ham with the bone or off the bone. If you prefer bone in, look for spiral cut ham as it will be much easier to carve and serve.

Score the skin, rub with garlic herb paste and roast slow and long at 350 degrees for 3 or 4 hours. It’s a great roast pork, leaner. Lower cost when compared to a loin, and serves more people.

Boss Tip: If you buy ham that is already pre-cooked, don’t just warm it up and call it a day. Try twice smoking it for extra smoky flavor. 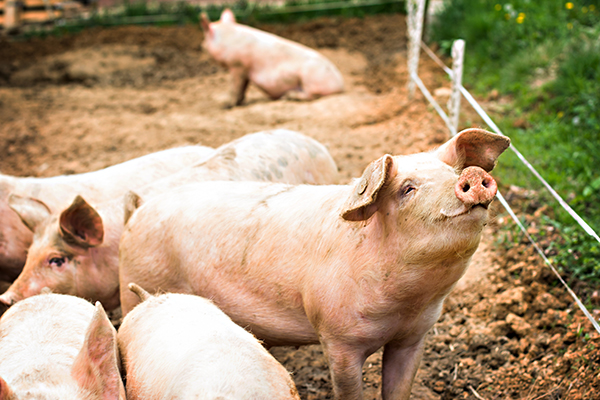 Many cultures around the world don’t just stop at the traditional pork cuts. Instead, they utilize the whole pig from head to toe. Whether it’s for economic, cultural, or flavor enhancement, these are the more popular of the exotic pork cuts.

All cartilage, no meat. Great for building stocks for sauces or soups. Use this instead of veal bones.

HALF OR WHOLE PIG HEAD

Versatile, and included in things like Porchetta di Testa, or a salami made from both the meat and skin of a pig head.

Cook pig tails the same way you would cook ribs at home in the oven, covered in tin foil first, then uncovered to crisp them up. Not a lot of meat, but chewing more cartilaginous, lip-smacking, and delicious. An amazing secret cut no one thinks about, and most people haven’t seen it, unless you’re regularly in Chinatown.

No matter which pork cut you decide to throw on the grill, there’s a Pit Boss Pellet Grill with your name on it. Whether you want to smoke low and slow some ribs for hours or quickly grill a pork chop, our grills can do it all.