Hey Pit Boss Nation, we know you’ve been wanting a sweet, juicy ham recipe for Easter dinner. Well, our pit masters have delivered on this one! Twice smoked ham, also known as “double smoked” ham is the best dish to serve for the spring holiday. It’s easy and delicious. Plus, the finger-lickin’ brown sugar glaze gives the meat a beautiful, crispy caramelization, which makes this recipe a perfect option to have smoking pork on the grill while you spend time doing what you love best – celebrating with your family.

In this guide, you will find everything you will want to know about picking the perfect ham and a bossin’ recipe for twice smoking it.

WHAT IS A TWICE SMOKED HAM?

A twice smoked ham is a pre-cooked ham that is smoked up on the grill so you can infuse it with even more texture and flavor.

WHAT TO LOOK FOR ON THE LABEL

There are three main types of ham.

You will find more cured ham than fresh ham at the supermarket. These tend to be pre-cooked and safe to eat cold, right out of the package.

From there, there are multiple ways of curing a ham. Although, the most popular is Wet Cured, also known as “City Hams.” City Hams are soaked or injected with a solution of salt, sugar, and other spices called a brine.

But if y’all want more than the standard, a flavorful smoked and cured ham is best the way to go. 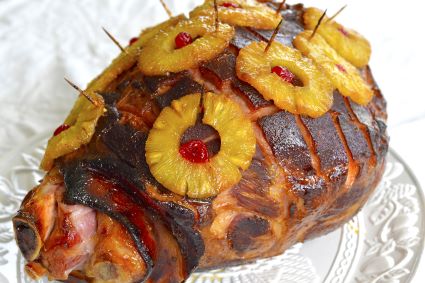 Ham vs. Ham with Natural Juices vs. Water Added and Water Products

Most labels will have water added as part of the wet curing process. Although, the more water added to the ham, the less flavor and texture the meat has. If the label says, “water added” or “with water products” look to get one with the highest percentage of protein in the nutritional facts. This should as close to 18.5% to 17%, as possible.

When you’re picking out your Easter ham, go for a bone-in ham. Boneless hams are easy to slice. Although, like most meats, having that bone attached gives the meat more flavor.

Whole vs. Half Ham?

This decision is based on two crucial questions, how many people are going to be served or... how much can you eat in one sitting?

A whole ham is the whole back side of the animal, labeled “leg or ham” above, and it typically weighs 18 to 20 pounds. The whole ham includes the butt and shank whereas a half ham is either the butt or shank.

For size, you want to get about ¾ pounds per person with a bone-in ham. A quick cheat sheet: 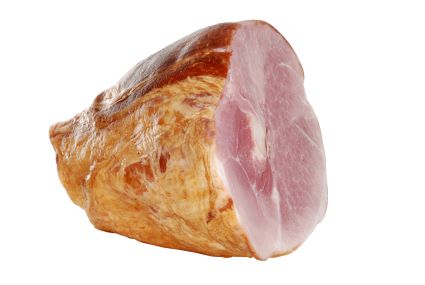 This option comes down to convenience. Spiral or non-cut are both great choices. Spiral cut hams will smoke up a bit faster, save you the trouble of slicing, and add more flavor in between the meat layers. Whereas a whole or half ham that is not pre-sliced, will give you more slicing freedom to add beautiful diamond scoring on the outside or cut the ham into larger pieces, and has a slightly lower chance of drying out as quickly.

HOW TO COOK A TWICE SMOKED HAM

Now that you’ve decided on which type of ham to use, follow these steps to get your Bossin’ Twice Smoked Ham recipe.

INGREDIENTS FOR A BOSSIN’ HAM GLAZE

Tracking the internal temp is very important for a Twice Smoked Ham, so make sure to use a meat probe or Pit Boss’ Remote Thermometer. These tools will give you precise temperature reads, and you can retain the moist, juicy texture in the pre-cooked meat.